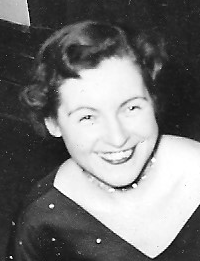 Age 90 of Dartmouth, passed away on March 21, 2021 at the Middle Musquodoboit Valley Hospital. Born in Three Mile Plains, NS, she was a daughter of the late Milton and Bertha (Whitehead) Haines.

As a young woman Gloria moved to Halifax and then to Montreal where she worked at the Royal Bank. Wanderlust took over and she travelled and worked across Canada and eventually settled in Missauaga, Ontario, where she worked for Canada Post until her retirement in 1995. Gloria returned to her native Nova Scotia in 2015. She was an avid hockey fan and along with her sister, Jennie, followed the career of Sidney Crosby of the Pittsburg Penguins. Until the Covid restrictions, Gloria enjoyed her morning ritual of walking across the street from her apartment building to MicMac Mall, joining friends for coffee and a walk in the Mall!

Gloria will be dearly missed by her family and friends, especially her 24 nieces and nephews whom she loved and supported through her life with never ending kindness and encouragement. She is also survived by her sister, Ruby Woods, Calgary, Alberta; brother, Lawrence, Ellershouse, NS. Besides her parents, she was predeceased by sisters, Blanche in infancy, Jennifer Haines, Linden Phelan and Marion Johnson; brothers, Raymond, Calvin, John, Reid, Ira and Garnet.

Many thanks to Ora Tolliver and the staff of Ora’s Guest House in Dartmouth for their care and compassion for the past seven months, as well as to the staff of 3W, Dartmouth General Hospital and the staff of the Middle Musquodoboit Valley Hospital, where she spent her last days.

Cremation has taken place and a family graveside service will take place at a later date in Saint Croix Cemetery, Saint Croix. Donations in Gloria’s memory may be made to the Alzheimer’s Society of NS or to Saint Thomas Anglican Church, Three Mile Plains.