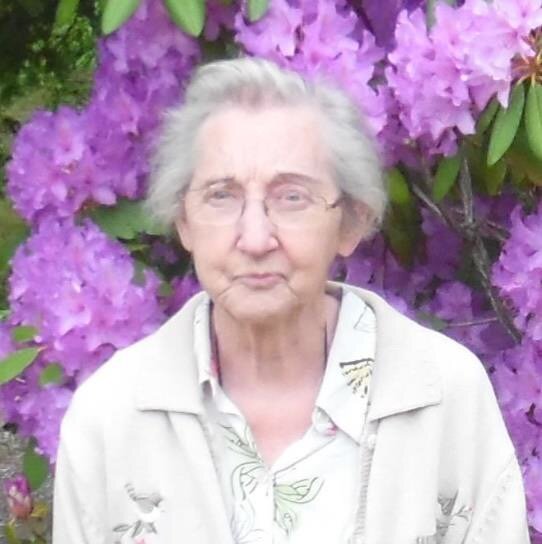 It is with great sadness that we announce the death of Gerene Ada Croft Robinson of Dehaven, Nova Scotia, who passed away on August 2, 2021, at the age of 88. Gerene suffered from Alzheimer’s and has been a resident of the Harbor View Haven Nursing Home in Lunenburg, Nova Scotia for the past three years.

Gerene was preceded in death by her parents Ralph Lewellyn Philbrook and Elma Ruth Primrose Moore and her older brother Ralph and four half-brothers Warren, Ivan, Freddie, and Frank. Her first husband, Malcolm Seaforth Croft, passed away on August 22, 1999, at the age of 70; Gerene later remarried in Canning, Nova Scotia to Ernest Levi Robinson in 2001 but he passed away at the age of 99 on June 11, 2019.

Gerene is survived by her two daughters and their families who all reside in the United States:

Carolyn Louise Croft Savage and husband, Woody; Carolyn’s son, Bradley and his wife, Ariel and their kids Jessica and Drake.

As a young girl, Gerene worked at the Wolfville University in the lunchroom, where she met Malcolm Croft. They married and one year later, Eva was born. Ten years later, Carolyn was born. Times were tough, and although Malcolm was a great carpenter, work was scarce. Carolyn (at age 3) was having bronchial problems and needed a warmer climate. Therefore, when Gerene’s brother Ralph called from the military base in Blytheville, AR with a job offer for Malcolm, they decided to move the family there.

A few years later, they moved to Jonesboro Arkansas, where Gerene went to work at the local hospital. Malcolm also went to work at the same hospital as Maintenance Foreman. Gerene became a Respiratory Therapist. They worked there several years, and saw both daughters married, giving them grandchildren to enjoy. Malcolm’s health began to deteriorate; therefore around 1993, they made the decision to move back to Canada as they still owned land there. The two of them built themselves a cottage-type home overlooking the Bay of Fundy on that land. Malcolm’s cancer took him away in 1999. On November 15, 2001, Gerene (age 68) married Earnest Robinson (age 82) at the Canning United Baptist Church where they were both members. Ernest was retired from the Department of Fisheries and Oceans, and he was also a veteran of the Second World War. They lived in Ernest’s home most of the time during their marriage with occasional visits back to Gerene’s former home. Earnest passed away in 2019 while Gerene was in the nursing home. One of Gerene’s greatest joys was living in her home on the Bay of Fundy! Gerene had several hobbies. She was a very good artist and enjoyed painting landscapes of the local area. She also enjoyed knitting and making hook rugs, reading, cleaning, yardwork, and loved to watch Dr. Phil in the afternoons. She would be quick to tell you however that she does NOT like to cook!

In summary, she was a wonderful wife and mother/grandmother/great grandmother. Her grandson and youngest great-great grandson were both named after her first husband, Malcolm. Your daughters, Eva Marie and Carolyn, both are eternally grateful for your love and devotion to us and to our families.

Share Your Memory of
Gerene
Upload Your Memory View All Memories
Be the first to upload a memory!
Share A Memory